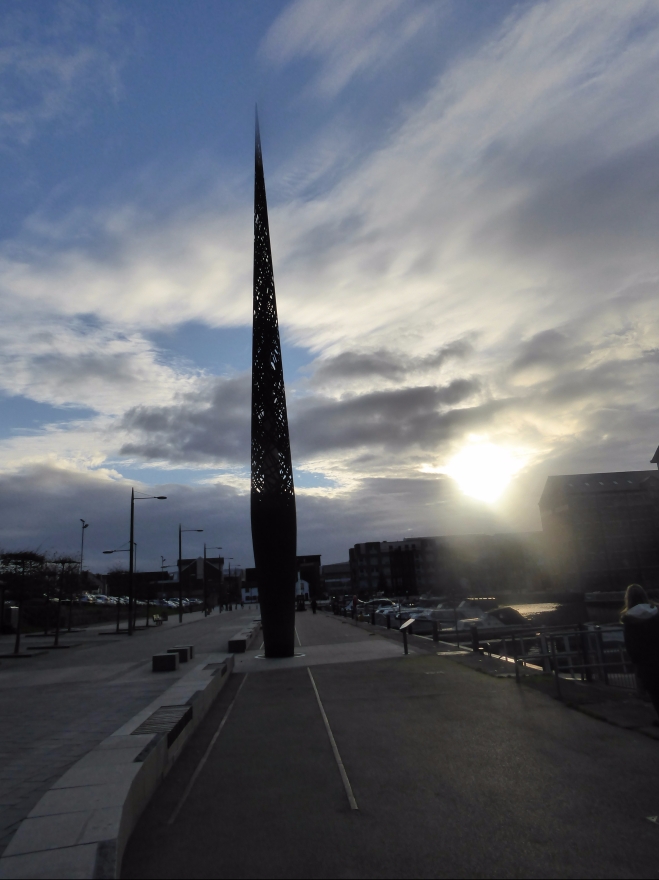 This unusual public art by Wolfgang Buttress is a 22-metre-high beacon and landmark on the way between Gloucester Docks and the city centre.  It symbolises a candle as a reference to the nearby Cathedral, or a flame to remind us of the many fires which have devastated the old buildings over the years.  The most recent fire was at Bakers Quay, which I wrote about a couple of years ago.

The structure is made of ‘Cor-ten’ steel, which I’m not a great fan of!  It seems to be cropping up all over the place on public buildings and local businesses such as restaurants.  It is supposedly a ‘high strength, low alloy, weldable structural steel, which possesses excellent weathering resistance due to the formation of a protective oxide coating which seals the surface’.  This is supposed to give an attractive finish, but to me it just looks rusty!  I think it is a case of the ‘king’s new clothes’.  I can’t imagine what my old dad would have thought of it, as he spent his life in the steel industry and presumably was not a great fan of rusty structures!

The structure is etched with the words of Ivor Gurney’s poem, Requiem;

Pour out your light, O stars, and do not hold
Your loveliest shining from earth’s outworn shell
Pure and cold your radiance – pure and cold
My dead friends face as well.

Pour out your bounty moon of radiant shining
On all this shattered flesh, on all these quiet forms;
For these were slain, so quiet still reclining
In the noblest cause was ever waged with arms.

I have written about Ivor Gurney (1890-1937, a gifted composer, musician and poet, in a previous post. He was born in Gloucester and became a chorister at the Cathedral.  Later, he played the organ at the Mariners’ Chapel which I also wrote about recently.

While serving in the trenches during the first world war Ivor wrote very moving poetry about his experiences, and memories of his beloved Gloucestershire, the people, the history and the beauty of its nature.

A truly thought provoking poem written by Gurney is Thoughts of New England.  It really moves me as it speaks of the Gloucestershire people who emigrated to the New World. Three of my children emigrated, one to New England, so it has a special relevance to me. And, while I can see the appeal of a new life in a vast country with seemingly endless opportunities, like Gurney, I am tied to this tiny island country with it’s history and heritage.  I feel the weight of the past in the rivers, the buildings, the countryside and the people.  Hence the title I chose, which is a line from Gurney’s poem…

Gloucester streets walking in Autumn twilight,
Past Kineburgh’s cottage and old Raven Tavern,
That Hoare he kept, the Puritan, who tired
Or fired, and took a passage in the ‘Mayflower’,
Gloucester streets walking in frost-clear hour —
Of ‘Captains Courageous’ as a boy read, thinking,
And sea-ports, ships, and all that boy desired . . . .
Walt Whitman, history-scraps and Huck Finn’s cavern:
My thoughts went wondering how the New England Folk
Walked twilight now, watched stars steady or blinking —
If thoughts came Eastward as mine Westward went.
Of our ‘Citizen’, the ‘Massachusetts Times’,
And the boys crying them perhaps about their lanes.
But those no historied ground of Roman or Danes.

What are the streets that have no memories,
That are not underset by ancient rubbish?
Where gables overhang, and the quarters clang
From Cathedral towers, and the slops or dinner dish,
Hurried a man voids handily into the gutter:
And ghosts haunt the streets and of old troubles mutter.
Where steel and scarlet of the military
And routine use flash vivid momentarily;
Imagination stricken unaccountably
At full day into pictures not looked for even,
And children from their play by curfew driven.

Are there men of my blood over Atlantic
Wondering there what light is growing thick
By Severn and what real thing Cotswold is?
Are there men walking slow till tiredness leads in
To write or read till the night’s veil grows thin;
Insatiate desiring what hope would win?
Is the air clear there as Thoreau’s prose,
With frost and sparkling water, and day’s close
As mild, as soft as shows in ‘Evangeline’?
(Since all verse from the air or earth does win).

Do they hear tell of Domesday Book, and not
Think of this Gloucester where the scrivener wrote
Command of reeves first set their lists to begin?
Do they wish walk at evening where the earls went in
And William: Are there not crowns of England old
That first in Gloucester’s Abbey showed their gold?
Can villas contain man in unloving hold
As here the cornered, the nooked low-ceilinged beetle-browed
Houses cloak man in; or the strict thoroughfares
Stone or asphalt-paved ally to man?

Are there great joys in April her high days
For those who cannot high imaginations see
Of other men builded, stirred to a great praise?
Cotswold earthing profound for white material,
Masses of stone gone slender as a silver birch,
Upwards in dazzle to an arching azure.

O where in the new towns shall recompense come,
For the market-days, the week-end trouble without measure,
The crowded four ways and cattle markets boom,
And country faces seen often with so much pleasure?

Can New England think deep thoughts of her bye-ways,
Is Abana and Pharpar a balance for
Severn receiving Avon, at her knot of highways,
Her Abbey township, beneath so high a cloud floor?

But nevertheless one would go very willingly
At the year’s turn, where Washington or Lincoln walked,
Or praise ‘Drum Taps’ or ‘This Compost’, and hear talked
Speech of Lowell, or Hawthorne, or Holmes and be
Pleased with citizenship of Gloucester or Worcester
And companionship of veterans or veteran’s sons
Of the Wilderness or Richmond, see the old guns
That set Chattanooga’s thronged woods astir;
Or woke terror in steadfastness with red anger.

But not for longer than the strangeness lasted.
Severn yet calls not to be resisted:
And the mix of Dane thoughts, Roman, with Middle-Age
Calls all love out to mark on any page.

The glory of Peter’s Abbey high up in Summer,
Or low in Winter’s gloom, and a wavering shape,
Are more than is ever seen by foreign comer
To Connecticut, or Staten or Providence with its cape,
Being loveliness and history and height in one.

And there is nothing uprooted that is not changed.
Better to stay and wonder in the half light
How New England saunters where Kipling loved and ranged, so
And watch the starling flocks in first autumn flight.

The New World has qualities its own,
But the Old not yet decrepit or withered is grown,
And brick and timber of age five centuries known
Are consolation for poverty enough
Against New York, where they say Opera is brilliant,
And the byeways with five dollar notes are strown.
The stuff of Liberty is a varying stuff,
But from Grant’s men. Lee’s men, nobleness should never want.

Here are some of my photos of historic Gloucester to enjoy…

A corner of Gloucester cathedral 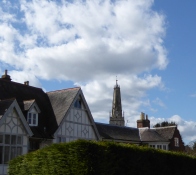 A lovely day in the Cathedral grounds

One end of the Cathedral 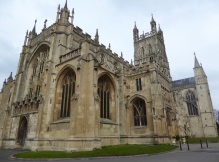 Another view of the Cathedral 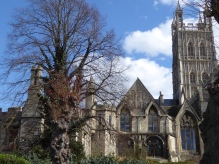 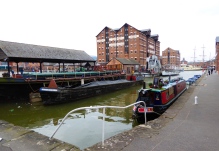 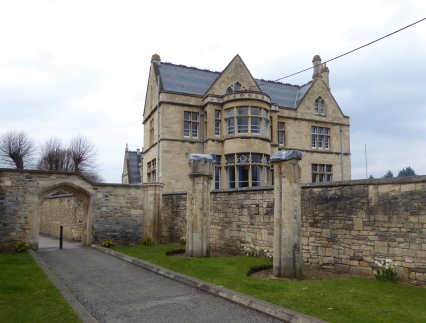 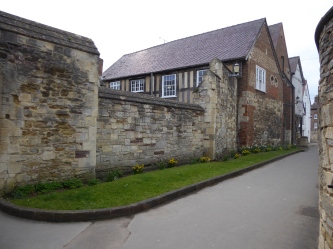 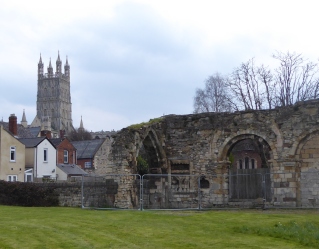 Ancient wall by the original tramroad at Gloucester Docks

Wall painting to remember the fallen in WW1 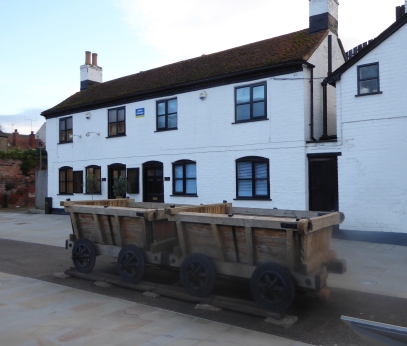 painting of the old warehouse

6 thoughts on “What are the streets that have no memories” 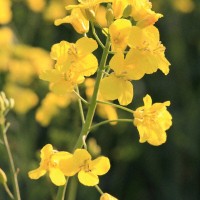