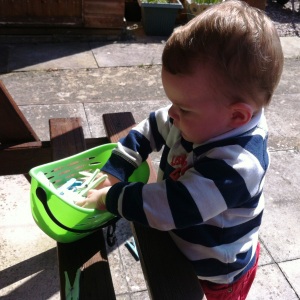 One of the songs sung by the choir I belong to at our recent concert is Perfect Day.

Today has been just perfect. It is usually called Grandma day as I look after Stanley on Wednesdays and Thursdays. But today it was Turtle Day as I had bought a turtle shaped sand pit for him to play in.
Stanley really is a delight in every way and just spending time with him makes me feel wonderful.
It was especially good today for two reasons
1. We have both been feeling very unwell until today, with chest infections followed by throat infections
2. The sun was shining in a clear blue sky and it was lovely and warm.
Stanley usually arrives at 8am to be greeted by my little dachshund, Dayna who races out of the front door to greet him. They both then race in to get to the best armchair ~ Dayna, and the Chuggington corner ~ Stanley. Now when my children were little it was all Thomas the Tank engine and I do feel a bit disloyal saying this but Chuggington is just so much more exciting! I have collected all the trains ~ wooden and die-cast, some track, two carrying cases, a hard back story book and a floor layout for imaginative play. Now Stanley is only 16 months old but he plays with Chuggington things for hours. He ‘rides the rails’ around, across and under furniture whether or not the dog is sitting on it, he builds tunnels with mega bricks (or grandma’s legs), and he drives the trains in and out of their sheds in the carrying cases endlessly. He just never seems to tire of it. At lunchtime as a special treat he gets to watch an episode of Chuggington which I have pre-recorded while he eats what I have prepared. I have 78 episodes recorded now so that pretty much guarantees peaceful lunchtimes until he starts school!
I jokingly say to my daughter that if I were to go on Mastermind, the BBC high brow quiz show, my specialist subject would be Chuggington ~ I know so much about it I have started creating new storylines as I watch. I also make pictures for Stanley by cutting out the card trains which come with each new toy and building a scene around them with the train names written on. I then laminate them. Stanley loves these and it is how we both learned all the names.
But today, even Chuggington came second to the TURTLE sandpit. I sited it on the patio near a gazebo so that Stanley would have some shade and Grandma would have somewhere to sit. Having forgotten to buy buckets and spades etc., I gathered old plastic containers, a colander and a jug, spatulas and wooden spoons, which worked almost as well. And then the fun started.
When Stanley had enough of that exercise he thoroughly inspected the garden. Being his first Spring at an age where he could make sense of his surroundings it was a joy just to follow him watching and listening. But the highlight for me was sharing the discovery that two of the birdhouses my daughter made for me are occupied by nesting blue tits. Stanley adores watching birds in the trees and bushes, in the sky or on the ground, at the water table or on the feeders. So to show him where they are nesting was a joy.
After that he toddled up to my shed. Now anyone who has read my post “Windows” will know that my sheds are very special places for relaxation and meditation and usually no-one else ventures in there. However, today Stanley looked at the shed, pushed at the locked door and said, “Open, Yea?” in a voice that would totally melt the polar ice cap. Of course I said yes and in no time at all the nicknacks in my sanctuary were all rearranged. There was a moment when I looked at him, ancient toy car in one hand and orange wooden rosary prayer beads in the other and the happiness I felt took my breath away. And I realised that at that moment Stanley and I were both in that place where ‘heaven happens’.

Blue tits are nesting in the boxes my daughter made 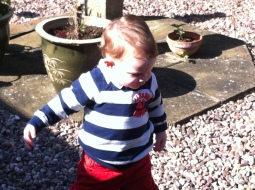 What shall I play next?

This is new, is it for bouncing on? 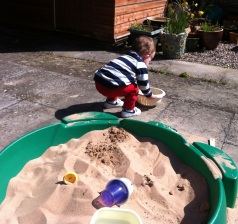 Let’s spread the sand around 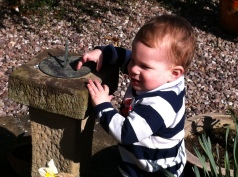 This bird is not moving

Can I climb in? 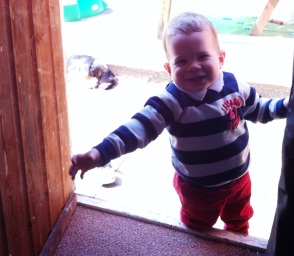 Can I climb up here?

Ooh its so sunny today

Can I make the wind chimes sing?

The stars of Chuggington, Koko, Wilson and Brewster, the traineers 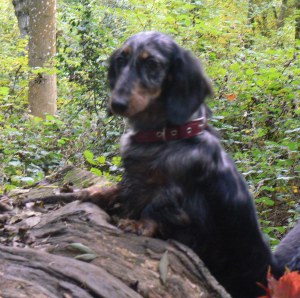 9 thoughts on “Its a Perfect day” 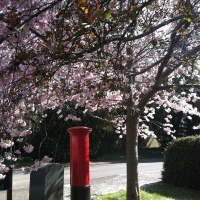