I have made a rather obscure link to this week’s photo challenge theme, which is ‘security’.  But, as regular readers of my blog know, I will use any excuse to write about my grandchildren!

One of the many advantages of spending lots of time with the grandchildren is that I can have fun playing with their toys.

Currently I am enjoying Lego Duplo with Stanley who is 4 and Thea who is 2.  The sets are a far cry from the uninspiring little pieces I remember from when my children were young.  They are so colourful and child friendly now, with animals and themed sets.   Yet they still stimulate the imagination and encourage a world of creative play.

Fortunately I don’t have a tablet, or an ipad, or a kindle, or any of the gadgets they seem to get addicted to as soon as they can hold them these days.  And, horror of horrors, I only have terrestrial TV channels, not games on demand!  So at grandma’s house creative play still rules.

Thea is particularly enjoying the Forest Park and Family Pets sets because she loves animals while Stanley loves the vehicles and characters.  But, however many sets they get, their first desire is still to build the tallest tower!

My older grandson, who has reached the ripe old age of 13, is also into Lego.  He has a bedroom full of it and is very expert.  I don’t even attempt to meddle with his models though, as they are very technical and way beyond my skills.

So, you can imagine how impressed I was to hear recently that part of our national security agency, the Government Communications Headquarters (GCHQ), which is based near my home, had set it’s employees the challenge of modelling the building out of Lego. This is not just any regular building,  it is shaped like a doughnut, which must be really difficult to model.  But they did it and the result is impressive as it would be with all their skills brought to bear.

I can’t take credit for the photo as it was on the official GCHQ website, but I do have permission to use it.  I think it is brilliant, especially as it was created in order to raise funds for a local charity, Elisabeth’s Footprint, which is very dear to my heart.

Do click on the links to see more blogs on the theme of ‘security’ and if you want to know more about the Doughnut Lego model, or the inspiring story of the marvellous woman behind Elisabeth’s Footprint.

What else can you do with grandchildren in the absence of gadgets? Well, We build dens, paint, play with sand and water,  picnic in the woods, take the dog for walks, or go to farms, parks and forests.  If it is cold or wet we make up stories, poems and fantastical adventures…

What did you do today?

Did you go to the airport with an alligator,

Or go to the beach with a bear?

Did you eat in a café with a camel

And frighten the people there?

Did you build a den for a dinosaur,

Or run through the grass with emu?

Did you go to the fairground with a fox?

Did he win a goldfish for you?

Did you play houses with a hedgehog,

Or go ice-skating with an impala?

Did you drive a jeep with a jellyfish,

Or fly a kite with a koala?

Did you eat lunch by the lake with a lamb,

Or play marbles with a monkey?

Did you go on a nature trail with a newt?

Now that would be quite funky.

Did you eat an orange with an octopus,

Or splash in a puddle with a pig?

Did you quiver and quake at a queen bee,

Then go out and dig?

Did you ride the rails with a reindeer,

Or go to the seaside with a snake?

Did you climb a tree with a tiger?

Now that would be a mistake.

Did you race upstairs with a unicorn,

Or drive a van with a vole?

Did you make a wish with a wallaby,

Or did you do nothing at all?

Did you swim with an x-ray tetra,

Or sail on a yacht with a yak?

Did you go to the zoo with a zebra?

Tomorrow ~ are you coming back? 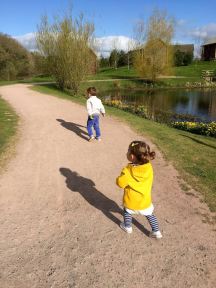 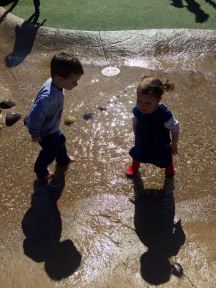 8 thoughts on “A Lego Doughnut” 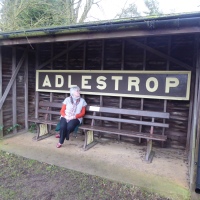 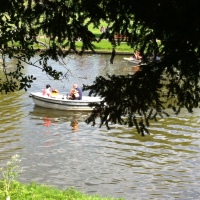