I have written before about the beauty of the Cotswolds but, I simply have to revel again in the variety of things to do and see here this July.  I have had such an interesting week!

I went up to the Lavender fields at Snowshill to catch a glimpse of the crop before it is picked for processing.  The fields high up in the Cotswolds are baked dry from the relentless heat this summer, but the  lavender can cope with dry conditions so it looked perfect.  I haven’t seen many poppies this year but there are a few scattered about. 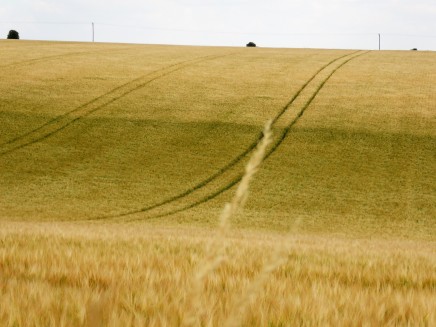 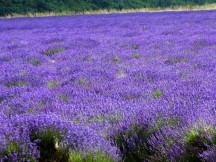 poppies are in short supply this year 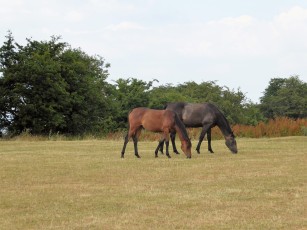 I was thoroughly spoiled by my daughter who took me to Cowley Manor Hotel for a luxurious Spa followed by a scrumptious afternoon tea.  This 19th century manor house has a fascinating history and has had some interesting residents.   In medieval times the manor belonged to Pershore Abbey.  But following the dissolution of the monasteries, it passed to a Royalist supporter, Henry Brett, who built himself a grand house on the land in 1674.   By the 1850’s the land was owned by a London Stockbroker, who built a huge house in the Italianate style on the site of Brett’s house.  This house had fabulous gardens with cascades and lakes running along the River Churn.  Then, in 1895 the manor was bought by James Horlick, the inventor of Horlick’s Malted Milk.  He made lots of changes to the house and extended it greatly.  He added a ballroom and a huge stable block to house his grand coaches and horses.  He also built many of the cottages in the village and planted thousands of trees.  Today he is remembered at the hotel where the restaurant is named Malt in his honour. 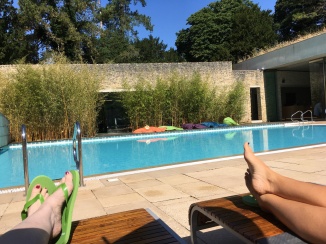 In the 20th century Cowley Manor had a very chequered history.  For a time during the second world war it was leased to Cheltenham ladies College, presumably for the safety of the ‘gals’!  At the end of the war it was sold to Gloucestershire County Council as offices and an education centre.  I remember going to conferences there as a young teacher in the 1970’s.   But, in the early 1990s there was a macabre twist to the tale of Cowley Manor, when the children of Fred and Rosemary West were placed there by the council’s child protection officers.  It was there that the children kept mentioning their sister Heather being buried under the patio.  But, it would be a year later before the true extent of the infamous couple’s crimes were uncovered.  There was a brief spell when the Manor was used as a nursing home, but by the start of the new millennium it was being converted into the hotel we enjoy today.

Of course, I have been back to my regular haunt of Cotswold Wildlife Park with my little granddaughter.  We made a special trip to see the 3-day old zebra.  We were amazed to see such a young animal frolicking around beside its parents.

Lastly, at the weekend, I went to celebrate the centenary of the Royal Air Force at the Royal International Air Tattoo (RIAT) in Fairford.  The sheer excitement of this annual event is hard to describe.  There are single aircraft and whole teams from all over the world on display.  But this year seemed extra special.  For a start we are in the middle of a heatwave so the sky was a perfectly blue backdrop to the aerobatics.  There was very little wind so the pilots were able to perform all their spectacular manoeuvres.  And, because it is the centenary year, there were some unique line-ups commemorating planes through the ages, from the Lancaster Bomber, the Spitfire, and the Tornado through to the Typhoon and the new F35.

It is hard to imagine that the RAF was formed just over 10 years after the very  first powered and controlled flight.  The bravery of the pilots and crew of those early planes is impossible to exaggerate.  At Fairford, we saw a military plane of the future ~ the amazing unmanned MQ-9B SkyGuardian.  It took 24 hours to fly the 3760 miles from North Dakota in the USA to Fairford in the UK.  It was entirely remotely piloted.  I can appreciate the technical genius involved, but I do feel deeply uneasy about the ability to cause death and destruction with clinical precision, remotely!

Apart from that I found the whole event breathtaking.  I love the deafening roar of the F16s, the glamour of the Red Arrows’ Hawk T1 fast jets, the practical beauty of the new Juno and Jupiter helicopters, the dignity and history of the Avro Lancaster 1, Douglas Dakota 111, Hawker Hurricane 11c, and the Supermarine Spitfire.  We owe them our gratitude.  But for sheer entertainment I really enjoyed the Spanish Airforce acrobatic team, Patrulla Aguila.  They were just amazing and all 7 Aviojets landed together in their signature move.  The Italian Frecce Tricolori were just as spectacular.  All I could do was watch and gasp as they mocked gravity and played with the sky.    I am sure that the routines these display crews perform should be impossible but they do them anyway.  And I loved every minute of it.

Of course my photos are pathetic as everything moved so fast, but I will add a small selection to give you a flavour of the day: 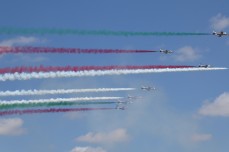 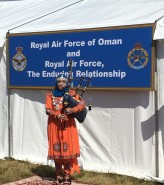 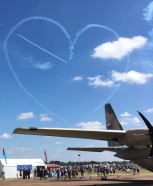 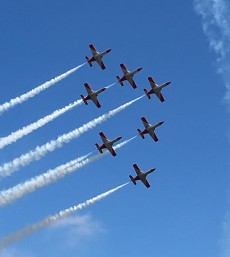 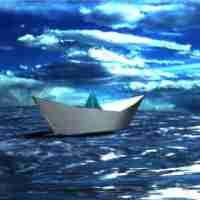