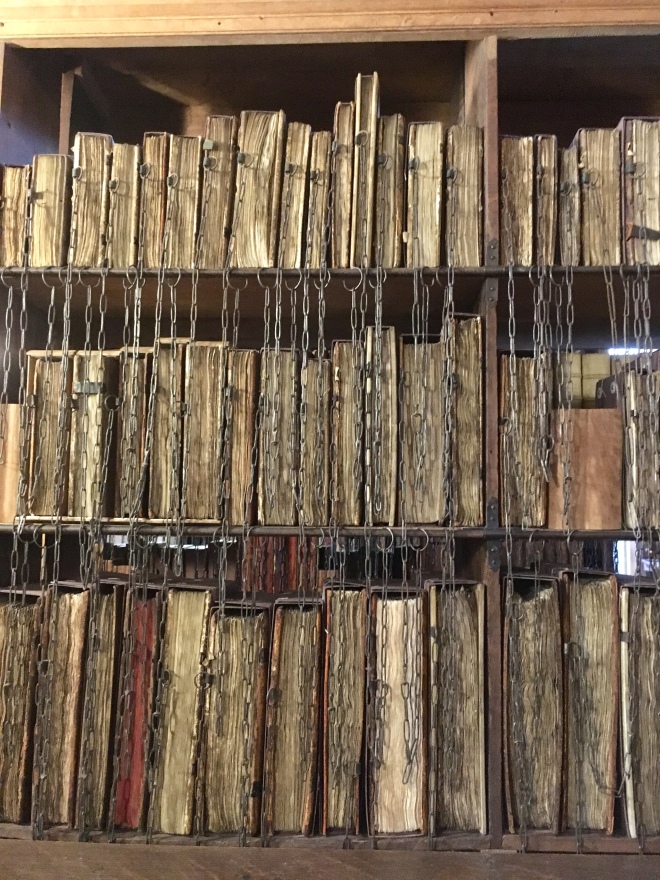 Medieval Manuscripts lined up and chained

The WPC theme of lines gives me a chance to post an unlikely group of photos this week. The beautiful lines of the graceful giraffes as they stretch for their leaves, railway lines near my home, truck lines in the iron ore mine at Clearwell Caves, lines of books in the chained library at Hereford cathedral (above), and the lines of poppies weeping from the window there.

I have had a really interesting and enjoyable week getting out and about with some of my favourite people, to some truly fascinating places. I have learned a great deal and conquered a long-standing fear.

I will write individual posts about each place eventually but for now if anything grabs your interest do click on the links to delve deeper.

It started with a trip to my happy place, the Cotswold Wildlife Park, which is in Burford.

Burford is a lovely little Cotswold town which has almost everything you could want. Honey coloured cottages, grand town houses, a fast-flowing river, independent shops, great pubs and a very upmarket garden centre attract many visitors.  But I love the Wildlife Park.  I have been visiting the place almost since it opened in 1970, firstly with my children, then my grandchildren.  It really merits a blog post all to itself but that will have to wait.  Because…

As soon as I got home, I went on a very informative tree walk in my local woods, led by the council Tree Preservation officer. I went on the walk because I have been concerned about the ‘conservation’ work going on, which seems to consist mostly of chopping down trees, to my dismay.   However, after the officer explained the importance of allowing light in through the canopy in order to encourage growth lower down, and on the floor of the woodland, I understood why it was necessary.  And, walking there every day with my dog, I have seen just how much plant life has emerged since the opening up of the canopy.

My next adventure was on Wednesday.  I had volunteered to go on my grandson’s school trip to Clearwell caves. Now, most people who read my blog will know that I am claustrophobic.  Stupidly, I didn’t think the caves would actually be hundreds of feet deep and extremely dark.  There are also many tunnels that can be explored because the caves were mined for centuries for the iron and ochre embedded in the stone.  It soon became very obvious that we were meant to go a fair way down these tunnels with our small groups of young children.

It is amazing what we can do when we have to, and for me there is nothing more important than children, so I made a conscious decision to focus on my little group and make their trip worthwhile. And it worked!  We saw and learned so much history and geology.  While working to hide my fear from the children, I seemed to overcome it.

At the end of the week I had a rare day out with my husband and some very special friends. The weather was atrocious but it was our last chance to see the Weeping Window of poppies at Hereford Cathedral.  I had seen the poppies in the Blood Swept Lands and Seas of Red installation in the moat at the Tower of London in 2014.  It was installed to commemorate one hundred years since the First World War (1914-1918) began. Each of the 888,246 ceramic poppies represented a military fatality during that awful war.   Most of the poppies in that installation were sold to individuals to remember a family member who had fought or died in during those dreadful years.  The proceeds went to 6 charities.  But, a section of the installation called Wave and Weeping Window was retained and went on tour around the country. During the last month it has been near to us at Hereford Cathedral.

Hereford Cathedral is a most fascinating place. It is set in a beautiful area with lovely tranquil gardens and is a huge and imposing stone building.   Inside,  the Cathedral holds some truly rare treasures.  There are exquisite icons, tapestries and stained-glass windows, some by Tom Denny whom I have written about before.  There are shrines and tombs that have been the focus of pilgrimages for 800 years and more.  The Magna Carta of 1217, the Hereford Gospels from the 8th century, and the Mappa Mundi from the 1300s are all here.  This is the largest medieval map known to exist.  However, For me, the most fascinating thing in Hereford Cathedral is the 17th century Chained Library.  Although there are a few others in the UK this is the largest to survive with all its chains, rods and locks intact. Can you imagine a time when books were so rare and precious that they had to be chained to a bookcase in order to keep them from being stolen?  Here they have 229 medieval manuscripts and they each have a chain attached at one end of the front cover.  The other end is slotted on to a rod running along the bottom of each bookshelf.  It is very ingenious because you can take a book down to read but you can’t remove it from the bookcase.  The strangest thing is that the books are all facing the ‘wrong’ way ~ that is with the spine at the back so that the reader does not get the chains tangled when the book is taken down.  Unfortunately, it means that one can’t see the title of the book so there is an elaborate numbered and alphabetical list on the end of each bookcase to show what books are where.

In the Cathedral square there is a lovely statue of Edward Elgar (1857-1934) the composer with his bike. He would have approved of the weeping window I’m sure.  I tried to attach a recording of Nimrod, from his Enigma Variations as it is so beautiful and appropriate. It is often played at remembrance services.  Unfortunately I could not get the attachment to play!

I hope you enjoy my eclectic mix of photos…

From the Wildlife Park 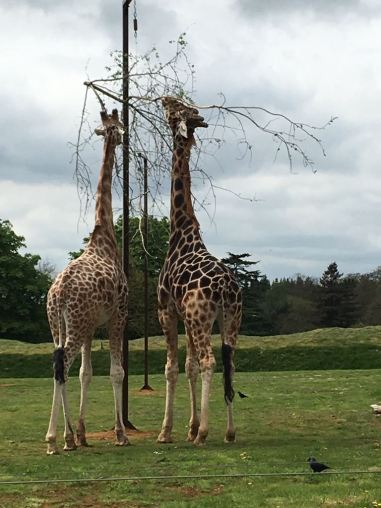 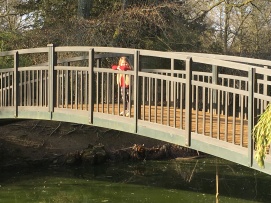 Thea watching for wolves through the bars of the bridge 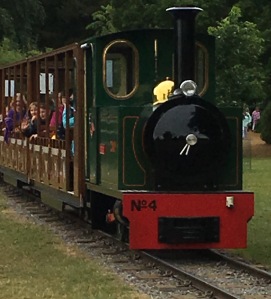 a line of carriages on Bella the train 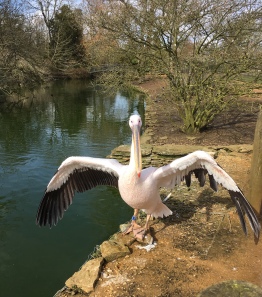 A graceful line from the pelican 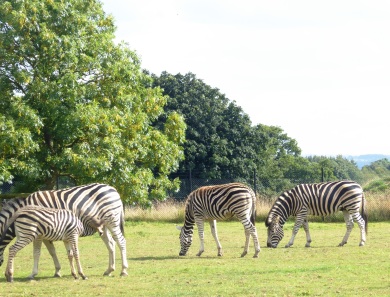 Stripey Lines on the zebra 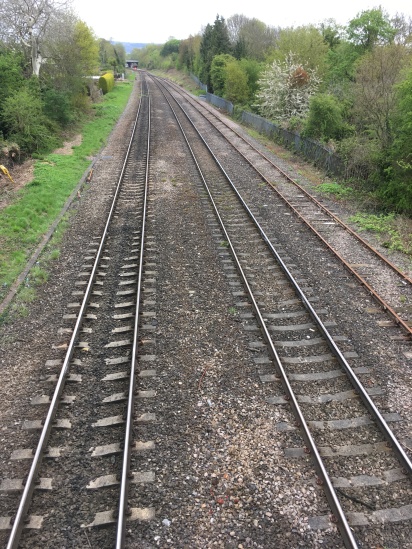 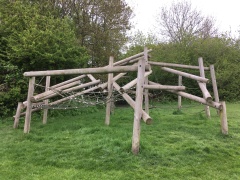 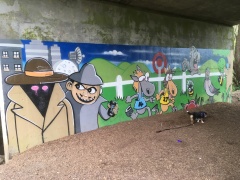 Graffiti or art lines the tunnel in the park 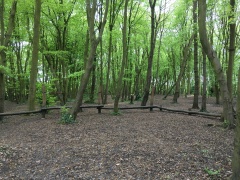 Balance bars in lines made from old tree trunks 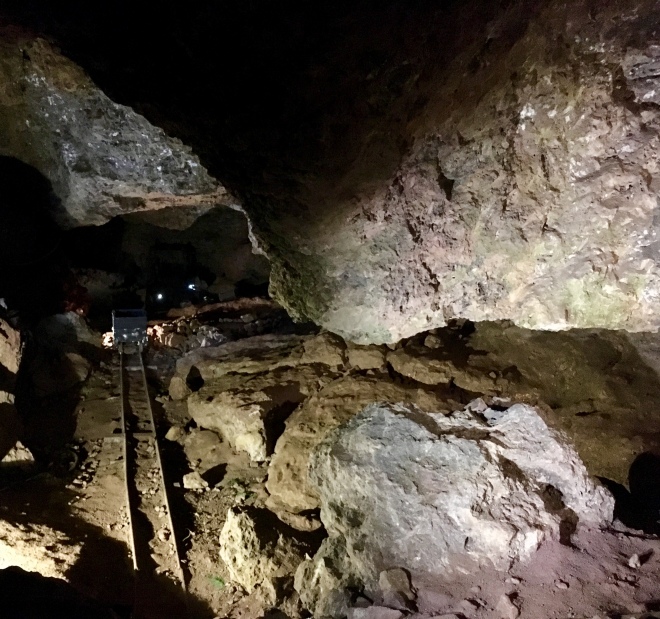 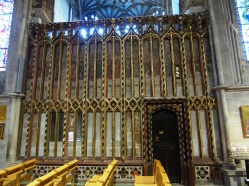 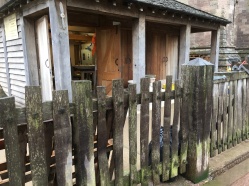 Fenceposts in a line at the stonemasons workshop 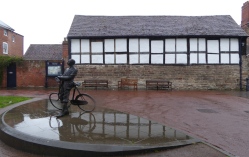 Sir Edward Elgar with his bicycle ~ statue in cathedral grounds 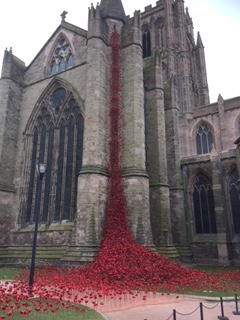 From the Chained Library 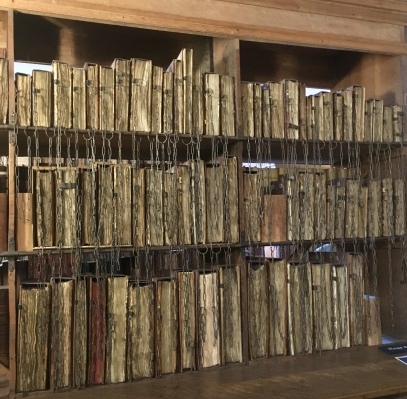 Bookshelves with chains, rods and locks 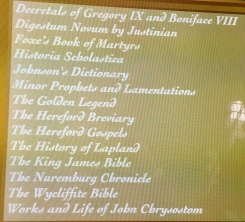 Contents of one shelf in chained library 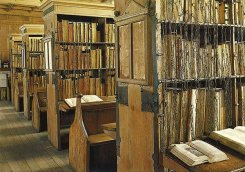 Medieval Manuscripts lined up and chained

Contents of one shelf in chained library

8 thoughts on “Lines of Enquiry” 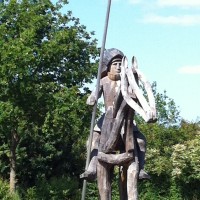 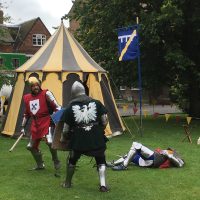 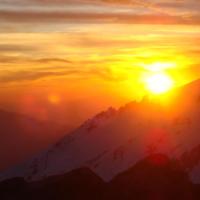 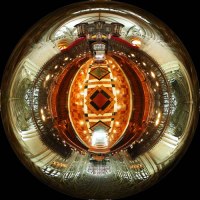 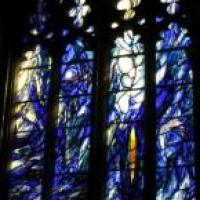 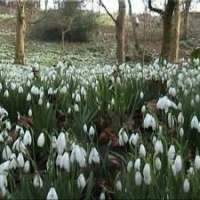 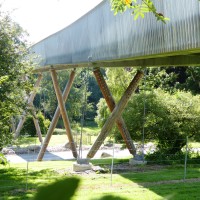 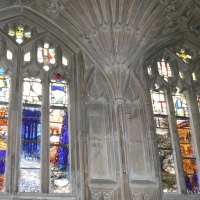 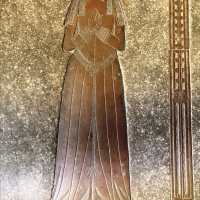