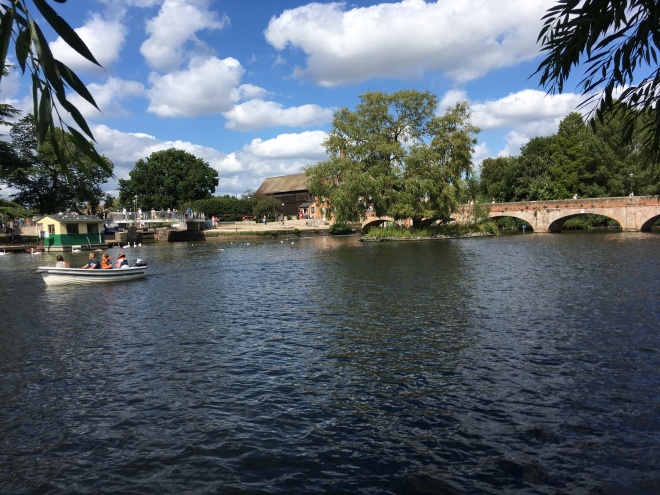 Tramway Bridge in Stratford on Avon, now just for pedestrians

I lead quite a pedestrian life these days, but I am very grateful that I am still reasonably fit, and can still enjoy regular walks.  Today I am especially grateful, as this autumn is glorious in the Cotswolds.  The sun is shining through the trees in the woods where I take my little dog for her walks, and the ground is covered with golden leaves.

Another walk that I never tire of, and take as often as I can, is the circular walk beside the river Avon in Stratford.  As a teenager I used to walk to school along the old bridge built in 1822 for horse trams.  It is now a pedestrian bridge, which leads to Bancroft gardens and the town.  But if you turn left, instead of crossing the tramway bridge, you can take a beautiful walk alongside the river.  Here you will get the most spectacular views of the Shakespeare Theatre, and Holy Trinity Church, which is the burial place of William Shakespeare.  The path goes on past the ferry, weirs and the old mill, but there is a bridge which you can cross to get into the oldest part of the town. 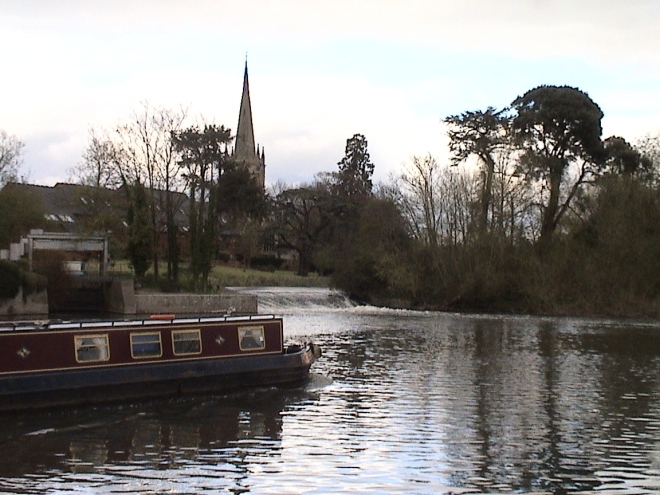 Weir on the Avon at Stratford

Whenever I have visitors, I take them to the Old Town to see some of the most beautiful places in Stratford.  I start at the British Legion memorial garden which is always peaceful and very moving.  There are several plaques on the wall about both World Wars.  There is also one of the most beautiful garden seats I have ever seen.  It is wrought in iron and has a design of soldiers marching amongst poppies. 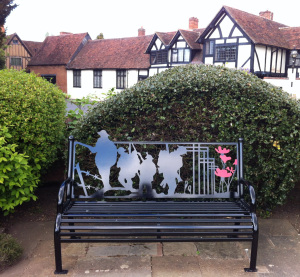 From there I walk past the Jacobean home of Shakespeare’s daughter Susanna and her husband Dr John Hall.  The main part of this beautiful house was built in 1613! 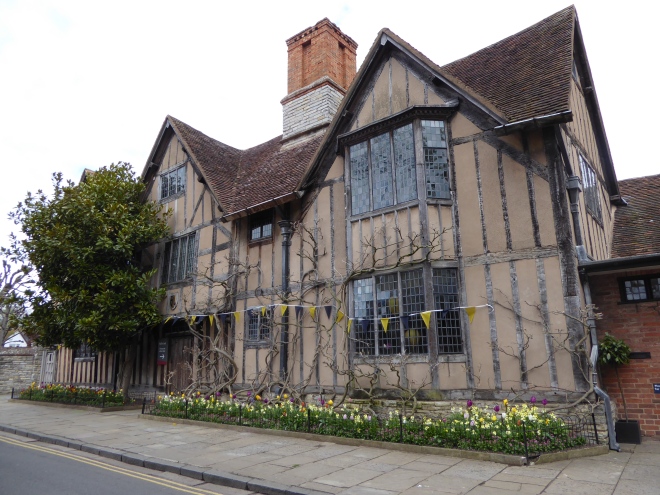 I then turn left into Church Street and walk on to Chapel Lane where there are some of the oldest buildings in the town, which were built for the Guild of the Holy Cross. This guild virtually controlled the town in the middle ages.  First you see a row of almshouses for the poor and needy parishioners. 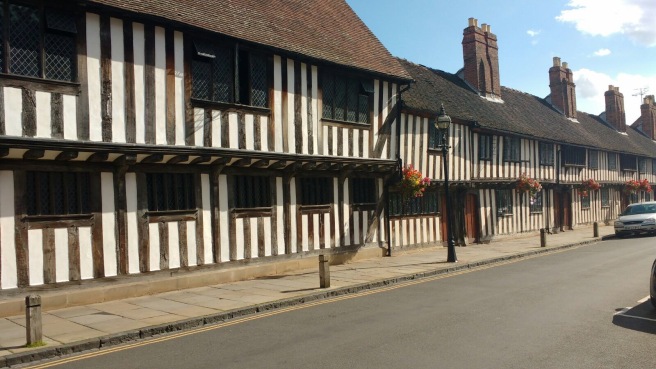 As a teenager I used to collect shopping for a wonderful old French lady who lived in one of the almshouses.  Inside, the rooms had solid oak floors which creaked, and low timbered ceilings.  I believe they were renovated in the 1980s and brought up to date inside, but the outside is thankfully unchanged.

Next door to the almshouses is the Guild Hall where you can visit Shakespeare’s actual schoolroom.  Then there is the Guild Chapel, with a history dating back to 1269!

Opposite the Guild Chapel is the site of New Place with its gorgeous gardens.  When Shakespeare bought New Place it was the second biggest house in Stratford.  It was his family’s home from 1597 until he died there in 1616.  Sadly, the house was demolished in the 18th century, but visitors can really connect with Shakespeare in the garden through imaginative artworks reflecting the plays.  It is believed that Shakespeare wrote the Tempest here and this summer there was wonderful artwork on that theme. 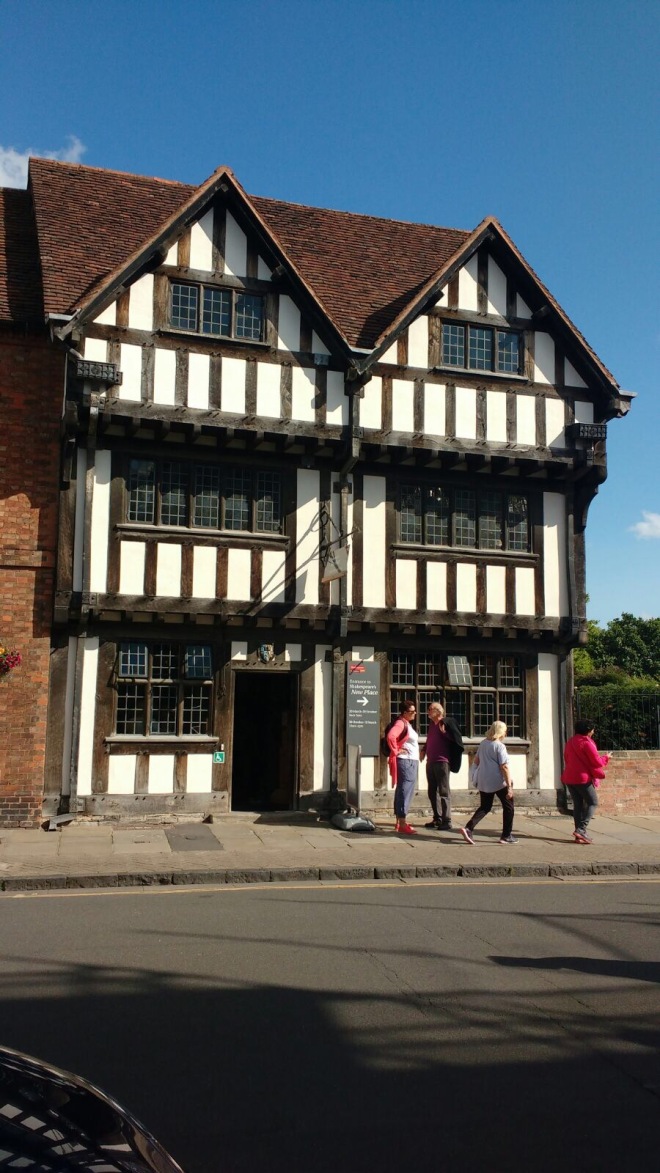 Nash’s House next to New Place

On the other side of the road, on the High Street, is the oldest pub in the town.  The Garrick Inn, like many buildings in the old town, is a timber framed and dates back to the 1400’s.  It revels in its colourful history of plagues, fires, priest holes, and ghosts! 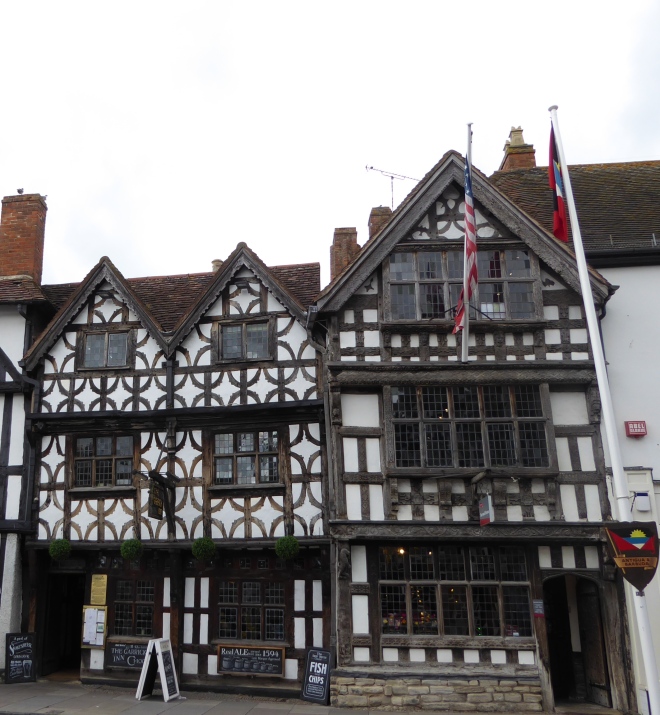 The Garrick Inn and Harvard House

Next door to the pub is Harvard House, where John Harvard was born in 1607.  He married and emigrated to Massachusetts in America where he was a preacher and teaching elder.  When he died of TB he left 230 books and a very generous legacy to a fund for the founding of a new college.  This was to become Harvard College, the oldest institution of higher education in America.  The house is preserved thanks to the work of Marie Corelli, the writer.  She lived in Stratford at the height of her fame and was passionate about preserving the old buildings in the town.  She bought Harvard House in a dilapidated state and was determined to save it.  In 1905, Marie met an American couple, Mr and Mrs Morris, who agreed to help pay for the restoration as a sign of friendship between UK and USA.   Between them, they donated the house to Harvard University, and, at the grand re-opening in October 1909, the American ambassador, Whitelaw Reid, declared it ‘free to all visiting sons of Harvard, and a rendezvous for all visiting Americans’.

I would probably go on to Shakespeare’s birthplace from here.  It really is worth going into the Birthplace Trust just to find out what Stratford was like in his day. 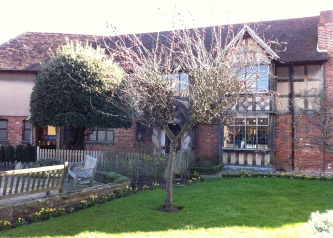 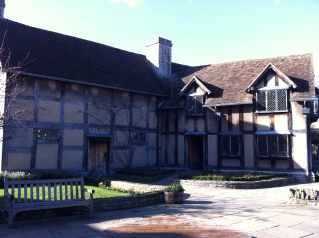 From there I would go back towards the theatre and the Bancroft Gardens and return to my car via the Tramway, picking up a whippy ice-cream on the way.

I have written other posts about Anne Hathaway’s cottage, the Theatre and Holy Trinity Church, which you can read by clicking the links.  But for now, you can enjoy some of the photos from my last circular walk! 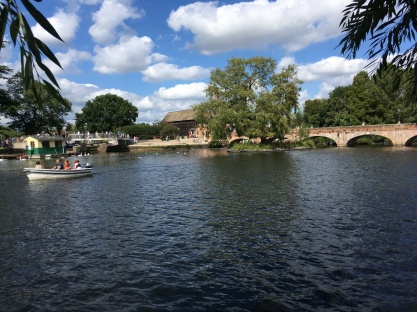 Tramway Bridge in Stratford on Avon, now just for pedestrians 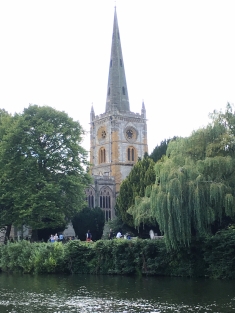 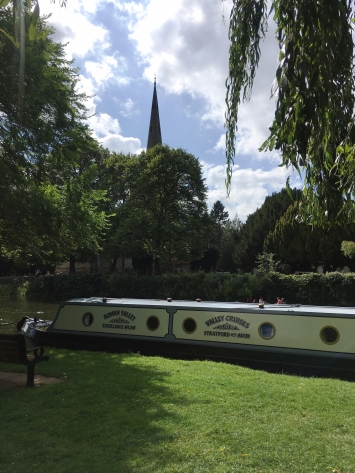 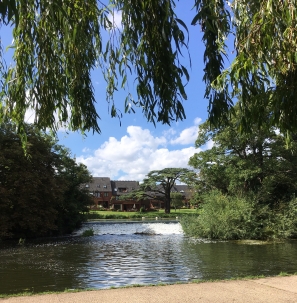 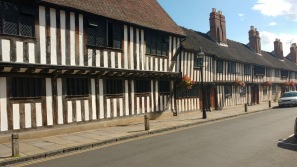 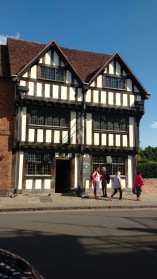 Nash’s House next to New Place 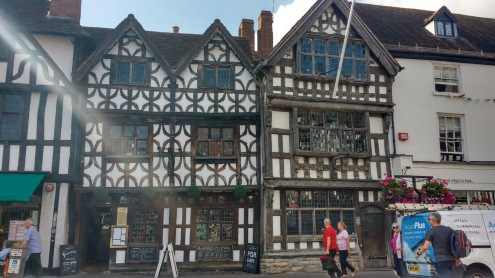 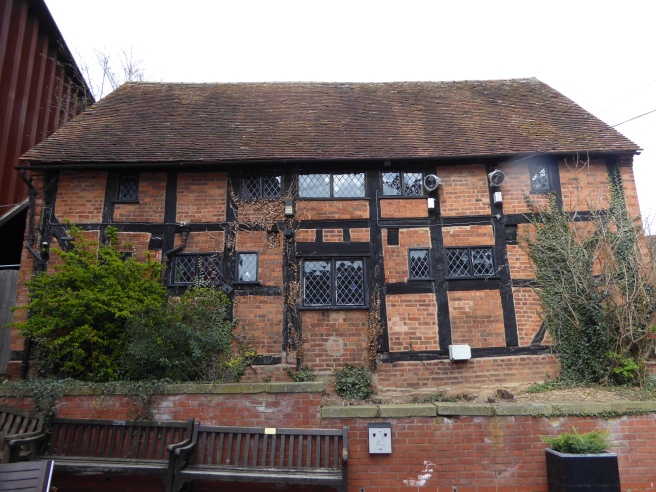 29 thoughts on “A Circular Walk” 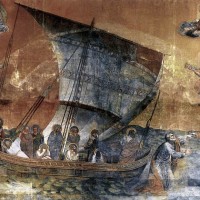 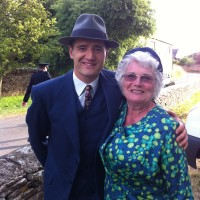 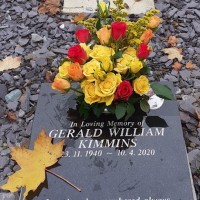