I have written about the Gloucestershire poet, FW Harvey before but today I was reminded of him strongly when I visited Hartpury, which is the village where he was born on 26th March 1888. Harvey was a contemporary of the great War Poets, Siegfried Sassoon, Wilfred Owen, Ivor Gurney and Rupert Brooke; indeed he became a close friend of Ivor Gurney and his fellow composer Herbert Howells while he was at King’s School in Gloucester before the First World War.

As I have written in a previous post, Will Harvey fought in the trenches of Flanders in that horrific war and was a prisoner for some time.  As I wandered through the churchyard of St Mary the Virgin in Hartpury on this idyllic afternoon in beautiful Spring sunshine, I couldn’t help but think of him.  How dreadful it must have been for Will and all the other young men to leave their homes and be transported to a living hell in the trenches.  No wonder Will Harvey wrote so fondly of Gloucestershire and the beautiful English countryside, as in this moving poem.

After Long Wandering:
I will go back to Gloucestershire,
To the spot where I was born
To talk at eve with men and women
And song on the roads at morn.
And I’ll sing as I tramp by dusty hedges
Or drink my ale in the shade
How Gloucestershire is the finest home
That the Lord God ever made.

I’ll drink my perry and sing my song
Of home and home again,
Pierced with the old miraculous pleasure
Keen as sharpest pain;
And if I rise to sing on the morrow
Or if I die in my bed,
‘Tis all the same: I’ll be home again,
And happy alive or dead.

other side of farming in Upleadon

I went to Hartpury to see the Bee Wall or shelter that was moved some years ago from Hartpury College to the graveyard at the village church.  It was in a dreadful state the last time I saw it, but now it has been beautifully restored to its original state.  It is a truly unique structure built by a bee-keeping stonemason named Paul Tuffley in the mid19th century, using  locally quarried Cotswold stone.  The bee shelter was meant to house wicker hives or skeps in which the bees would lay down their honey.  It is incredibly decorative with carvings on both sides.  7.3 metres long, 2.5 metres tall and 75centimetres deep, it has 28 sections or ‘boles’ for the hives or ‘skeps’ to go in.

Today there were just 2 skeps in the boles but there were plenty of bees buzzing around the beautiful churchyard.  According to the Domesday Book, Gloucester paid 12 sesters, or 24lbs, of honey every year to King Edward.  And in 1260 it is recorded that tenants from Hartpury Manor held land in return for payments in honey.  So bee-keeping has been a feature of Gloucestershire life for a very long time, and still is.

I hope you enjoy my photos of the Bee Shelter which I took today and find it as fascinating as I do. 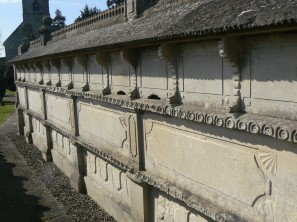 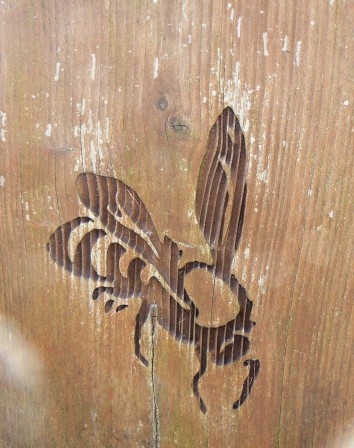 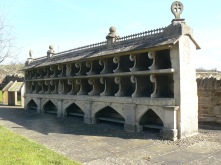 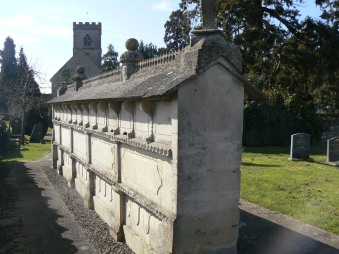 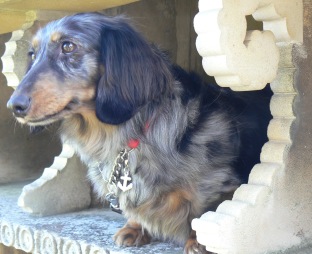