As it is Shakespeare’s birthday celebrations in Stratford this weekend I thought I would reblog a post I wrote when I first started blogging.

William Shakespeare was born on April 23rd 1564 and died on 23rd April 1616.  1964 was the 400th anniversary of his birth and I was living in Stratford on Avon, which was certainly the most exciting place to be at that time for a theatre mad teenager.

The highlight of my acting career had been the part of Mole in Toad of Toad Hall at St Gabriel’s Convent in Carlisle.  Cardinal Heenan was the honoured guest in the audience.  My part was memorable as it involved a tea party at Toad Hall.  We had real cakes and biscuits.   I had never seen those pink and white marshmallows with a biscuit base and coconut all over the top.  I became so engrossed in examining and eating them that I forgot where I was and had to be prompted to continue my lines.  “Oh, you silly ass, Mole”… 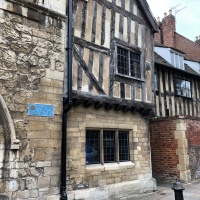