An unforgettable day for me was Easter Sunday in 1997.  I had travelled to kisumu in Kenya with a group of educationalists from Gloucestershire.

Sunday is market day in Kisumu and Easter Sunday is no exception.  Strolling around among the goods laid out on the ground,  we saw an abundance of bananas and mangoes, maize, and spices galore.  There were shoes made out of old tyres and handsewn clothing.   Dolrosa bought a live chicken for our evening meal.   Purchased goods were carried home by the women in baskets on their heads.  Heavy goods were bundled on top of a matatu, a type of minibus.

I went off to Mass at St Theresa’s Cathedral where I was due to meet the Archbishop.  I had brought gifts of rosary beads, bibles and prayer books from STM to be distributed among the small churches in the tribal villages.  I also brought a silver Chalice for the Archbishop.  The Mass was a total revelation to me.  The congregation were dressed in the most beautiful and colourful outfits I had ever seen.  The children were adorable and particularly well dressed as they were to make their First Holy Communion.  The Mass was in Swahili which I did not understand but the singing was absolutely wonderful.  It was accompanied by African drumming.

It was cloudy, hot and humid outside but lovely and cool in the Cathedral.  When Mass ended and we walked out, the heavens opened and the rain came down in torrents.  In no time at all the roads were awash and there were puddles appearing by the roadside.   From out of nowhere children appeared stripped to the waste and leaped into the puddles.  They were full of joy and having a whale of a time.  It was great fun to watch them.

When the rain stopped the children all vanished then reappeared carrying empty tin cups, jugs or buckets.  This fascinated us and we were curious as to what they were waiting to collect.  Within minutes of the ground drying we found out.  Flying termites!!  They crawled out from every nook and cranny and took to the air.  But the children were obviously expert at this and they caught millions of the creatures.  They were so proud of their haul as they showed us how many they had caught.

By the time we reached home we were curious as to why they would want all these termites.  We soon found out when we got back to Dolrosa’s house.  There she was sitting on the kitchen floor over a gas ring with a frying pan full of flying termites.  She was preparing them as a treat for our Easter breakfast after church. 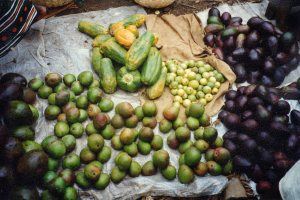 Mangoes on a market stall 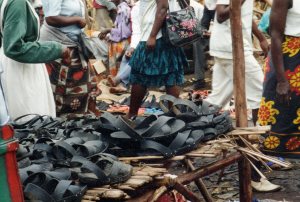 Shoes made out of old car tyres 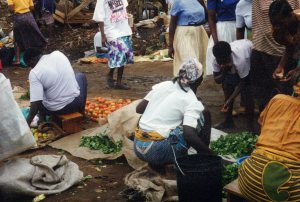 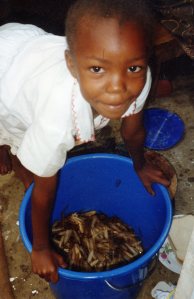 Heading out to fish on Lake Victoria