Me on set with Tom Chambers

It has been such an unusual and exciting week for me.  While I was on holiday in Cornwall, I got a call from a casting agent about doing some filming as a supporting artist for a BBC production of a TV series.  I had not auditioned or even applied for a part so I was very surprised and a little puzzled.  However the explanation was simple.  Earlier this year, I helped some students at the local university in the making of a short and very moving film, for their degree course.  In order to complete the whole project professionally I had to register with an agency which I did.  The film, “The Day My Name Changed” was produced, directed, shot and edited successfully.  One of the students was kind enough to write a glowing comment on the agency’s website about me, which apparently had been picked up by a casting agent who was looking for people of just my age and type.

So it was that I found myself working this week in the Cotswold countryside alongside professional actors I have admired for years.

The TV series is called Father Brown and it is set in some of the most beautiful Cotswold villages, which is perfect for me as I live nearby.   This will be the second series of the 1950’s drama based on stories by the author GK Chesterton, and starring Mark Williams who played Arthur Weasley in the Harry Potter films.  The character Father Brown, who wears trademark shabby robes and a misshapen hat, is a bicycle-riding, crime-fighting, Roman Catholic Priest in the series. Sorcha Cusack plays the Parish secretary, Mrs McCarthy.

I can’t tell you the storyline or the other characters in the series we were filming for professional reasons but I can say the whole experience was fascinating and really enjoyable, if a little exhausting!

I was told to arrive on set by 7am prepared to work for up to 12 hours.  First I had to go to a costume area where I found everything hung up on hangers or bagged with my name on them.  There were underclothes from the 50’s including corsets, petticoat, suspenders and stockings with seams.  There was a hat, gloves, shoes, a handbag and a pair of glasses, all genuine 1950’s.  There was a dress and matching jacket.  Once I had got into all of this on one of the hottest days of the year I was a bit uncomfortable!  Next it was into the makeup and hairdressing area.  Here there were several superb makeup artists and hairdressers equipped with whole tables of boxes and bags of exciting things ~ brushes of every size and thickness, rollers of every colour and type, hairgrips and combs by the dozen, and more makeup than I had ever seen!

These wonderful artists sat me down and transformed me with heated rollers then pinned on my blue hat.  A covering of mat makeup and pink lipstick as per 1950 and I was done!

I hardly recognised myself and I thought I looked ancient and awful but everyone else seemed to think I looked ok so off I went to be photographed by Continuity.  The continuity people are amazing and very important when filming.  As shots are not necessarily filmed consecutively it is really important that every detail is right.  The arm holding the handbag, gloves on or off, the right glasses on, hair still in place, makeup still on ~ the continuity people are checking and photographing constantly.

When everyone had been through costume, makeup, hair and continuity, it was time to line up for more photographs and an inspection for approval by the Director of Costumes.  At this point details could be checked and adjustments made.  Hats swapped, jewellery dispensed or removed, cardigans and jackets altered on the spot, shoes changed ~ his word was final.  Only when he was happy were we allowed to get onto a minibus to be taken to the actual set for the filming.

It was at this point I felt like a real star as we were treated so well.  Everyone on the crew from the driver to the director knew each of our names.  They have a list of the actors and supporting artists with photographs and are expected to know them by name.  We were given bottles of water during breaks, coffee and tea was available at any time, and a lovely cooked lunch was provided from a big catering van, which everyone used from the most important to the least.  There were crew buses which everyone sat together on to eat lunch.  After lunch everyone had to go through costume, makeup, hairdressing, photographs, continuity and inspection again to make sure nothing had changed.  Then off in the bus for an afternoon of filming.

The whole experience was wonderful, and, at the end of the day, 5 of us were asked to stay behind for late filming.  I was really excited to be one of the 5 chosen.  Suddenly a sleek 1950’s black car drove smoothly down the road and stopped right where we were filming and out stepped one of my favourite stars from Casualty who was also a winner of one of the best shows on TV in the winter, “Strictly Come Dancing” ~ Tom Chambers!

I can’t tell you what he was doing there but I was tickled pink to be on set with him and to have my photograph taken with him.

It was a long day and it was very hot.  It was uncomfortable wearing all those 1950’s clothes and the stiletto heeled and pointy-toed shoes were killing me. I still think I looked awful.  But I wouldn’t have missed it for the world.  I enjoyed every minute and I got to do it all over again on Thursday in a different village wearing a different costume.

I do hope they ask me again! 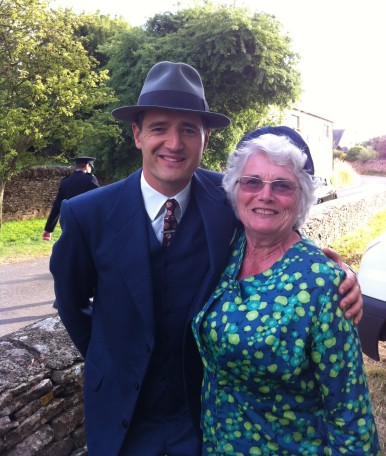 Me on set with Tom Chambers 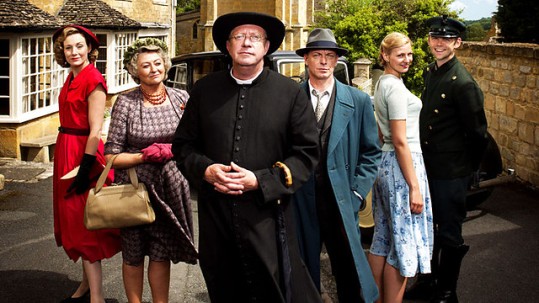 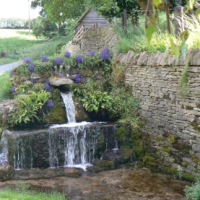